On the outbreak of the Civil War, he was entrusted with the execution of the commission of array in Warwickshire. After varying success and failure in the Midlands, he fought at Edgehill and, after the king’s return to Oxford was given, in November 1642, the military supervision of Banbury and the neighbouring country. He was attacked in Banbury by the parliamentary forces on December 22, but relieved by Prince Rupert of the Rhine the next day.

In March 1643, he marched from Banbury to relieve Lichfield and, having failed there, proceeded to Stafford, which he occupied. Thence on March 19, accompanied by three of his sons, he marched out with his troops and engaged Sir John Gell, 1st Baronet and Sir William Brereton at Hopton Heath.

He put to flight the enemy’s cavalry and took eight guns, but in the moment of victory, while charging too far in advance, he was surrounded by the parliament soldiers. To these who offered him quarter he answered that he scorned to take quarter from such base rogues and rebels as they were, whereupon he was despatched by a blow on the head. Clarendon describes his loss as a great one to the cause.

Northampton married Mary, daughter of Sir Francis Beaumont (not the playwright), by whom he had two daughters and six sons. The eldest son, James, succeeded him as 3rd Earl of Northampton. Henry became bishop of London. Charles, William and Spencer all distinguished themselves in the king’s cause — William was one of the original members of the Royalist organisation, The Sealed Knot. 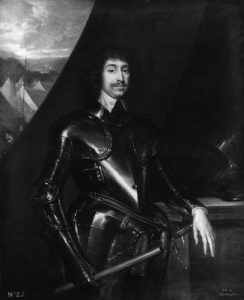 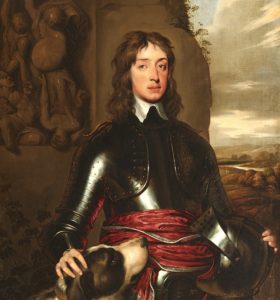